From the start of the freeway planning in the 1960s, this route was known as the Squaw Peak Parkway. On May 1, 2003 it was renamed in honor of Private First Class Lori Piestewa, a Hopi who was killed in Iraq. The parkway designation was also dropped, as strictly speaking a parkway isn't a full freeway like this route is.

Also in 2003, ADOT began a major rebuild from I-10 to Shea Blvd. Carpool lanes (with ramps to I-10) and auxiliary lanes will be added. 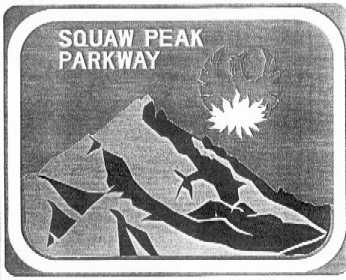 In 1983, Phoenix conducted its own design for the Squaw Peak Parkway. The initial design was from McDowell Rd. to Northern Ave., and would have used the route signs shown above. The city did end up building the stretch from McDowell to Glendale Ave. North of that, it was built by ADOT, as was the interchange with I-10 and AZ 202.

In 1985, a plan was finally adopted to build the Phoenix urban system, and the Squaw Peak was incorporated into it as AZ 51.

The finished product certainly had its critics. After ADOT took it over, they removed much of the landscaping and installed a cable fence down the median. They also installed safety railings along the edges of planters on the sides of the highway.

The other part of the name was controversial as well. The name was taken from Squaw Peak, but a rumor has been going around that "squaw" is actually a dirty word for a woman in a Native American language. Efforts to rename it after Ronald Reagan or Barry Goldwater failed, but in 2003 it was renamed after Lori Piestewa.

I'm not convinced about the "squaw" origins (my sources say it simply means "woman" in Aloquinian), but I'm not really opposed to the change. The name for the peak (which was also renamed) dates only to 1910, and was one of many squaw-named landmarks.

Although most people weren't aware of it, ADOT had alreadly quietly unnamed it. Officially, it's been just State Route 51 for several years. 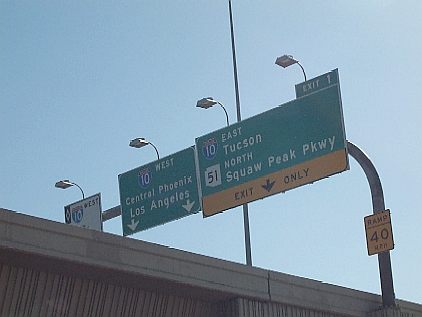 The name was actually posted at the I-10/AZ 202 interchange until a week or two before the renaming. ADOT's policy is to not use freeway names other than as auxiliary plates below standalone route markers, so the Piestewa name will probably not replace it. This interchange also had signs referring to the East Papago freeway (now the Red Mountain, AZ 202) but those are already gone. 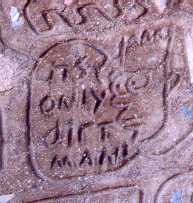 Don't have a parkway, man. Another controversy was over the art projects used as beautification. Bart is part of a large collection of frescoes under the Thomas Rd. overpass. 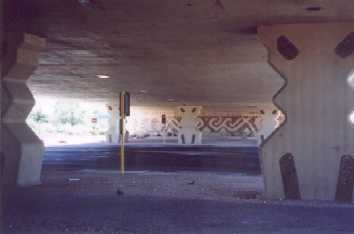 The overpass is held up by pillars styled after an Anasazi frog design. 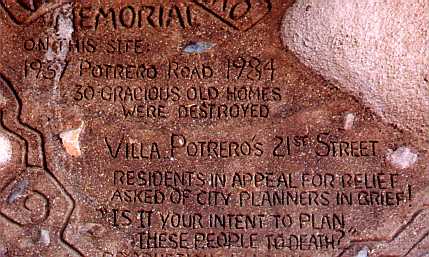 Another fresco depicts the highway crushing a neighborhood along with this epitaph.

People were mostly bemused by the Thomas project, and the wackier details aren't apparent while driving by. What really got people riled was the pots. 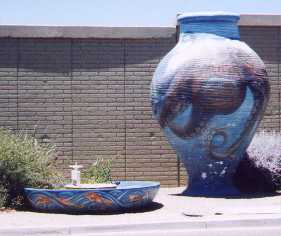 The Octopot is outside the freeway wall at Maryland Ave. There are several other giant vases like this, plus cereal bowls, coffee pots, and dishes on top of the wall, some appearing to be broken. A lot of people didn't like it, but I do. I like something a little unusual. 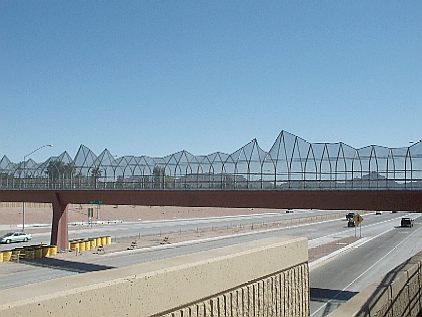 This pedestrian bridge near Thunderbird Rd. is meant to evoke a range of mountain peaks. Unfortunately, I don't think it works well with chain link fence.