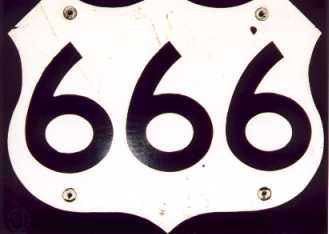 The Highway of the Beast. Along with 69, this is probably one of the less popular highway numbers, although I think it's pretty neat.

The road earned its nickname between Alpine and Clifton, going around hundreds of curves.

US 666 became an extension of US 191 in the 1992. ADOT says they did it for route continuity, and because a north-south route isn't supposed to have an even number, but you can guess why they really did it.