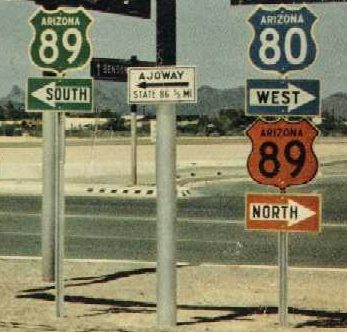 In the early 1950s, Arizona experimented with color US signs. By the late 1950s the state had switched to the standard black-on-white shields. This assembly was in Tucson. (Photo courtesy of James H. Lindsay).

Arizona has seen quite a few of its US routes decommissioned since the rise of the Interstate systems. At one time Phoenix had four US highways running through it; now there is just one.