ADOT considered adding the Mormon Lake road to the highway system in the early 1970s. Although it shows on some ADOT maps from that era, it was never added to the system and disappeared by 1974. 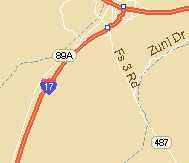 This route shows up in Microsoft's Streets '98 (data by Geographic Data Technology). It does explain where the missing x87 route is. It's currently National Forest Highway 3.