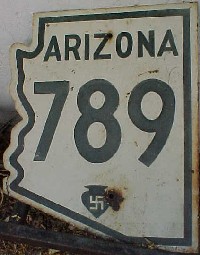 Although the above shield has the swastika design, AZ 789 wasn't designated until 1956, well after WW II which was when Arizona was supposed to have stopped using it. Other than that, it appears authentic for the time.

Despite the state route designation, this was actually a border-to-border route across the US. Inside Arizona it was always multiplexed with another route number, US 89, US 60, US 666, and US 66.

It disappeared off Arizona's state map around 1965, but peristed in other states much longer. CO 789 appears to have existed until the early 1980s, and WY 789 still exists. See Andy Field's page on WY 789 for more information.